Hello everyone. I hope you all had a safe and Happy New Year!
A lot has happened since I posted. First I'd like to start off with October.

My cousin Parveen and I organized a walk to raise money for Pancreatic Cancer Research. It was through the Lustgarten foundation. I mainly used Facebook to raise money.
There was a lot of generosity out there from friends and family. Our team was able to raise $1,745 in one week. Altogether, participants raised $244,345. One hundred percent of this money went directly towards research thanks to corporate sponsors who underwrite all of the administrative costs. Hopefully, these funds will go towards research that will help people with pancreatic cancer live longer. Ultimately, researchers will be able to find a cure.

Lots of people donate and wanted to be there in person to walk with me. Those who came out on the cold October day were Dan, Ahad, Saba, Trisha, Gina and Mukta. Of course Parveen and Jeff were there. The support was overwhelming!

Here's a picture of the team before we started the walk: 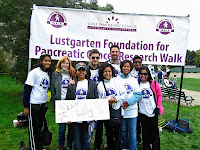 My mother was diagnosed a year ago in December. Her doctors and nurses at Dana Farber have been amazing. A year ago I was extremely scared and did not know what to expect.

She underwent nearly 11 cycles of IV gemcitabine treatment. Unfortunately the drug's effectiveness came into question in early December 2010 due to her increased pain, weight loss and other symptoms.

A CT scan showed that the cancer has spread to her liver. There is a small metastasis but it's still not great news.

Now the doctor is trying oral chemotherapy. The drug is called Xeloda (7 days off, 7 days on). The side effects are a little harsher than Gemcitabine, the greatest concern being toxicity.

So far she's had 2 rounds on the drug and she's been doing well. She's gained 2 of the 10 pounds that she lost in December. The pain is still a problem, mainly her back. She has nausea once a week, she'll vomit about once or twice a week.

Otherwise everything is the same. I will keep you all updated, I am sorry I haven't updated in a while.

Purpose of This Blog

This blog is meant for my family and friends. My family and I are so lucky to have so much love and support that I've decided to change my blog into a place where I will periodically update everyone with my mother's progress, condition, and other developments. Feel free to post comments, links, interesting articles etc.

Shahrin Ahsan
I enjoy long walks on the beach.